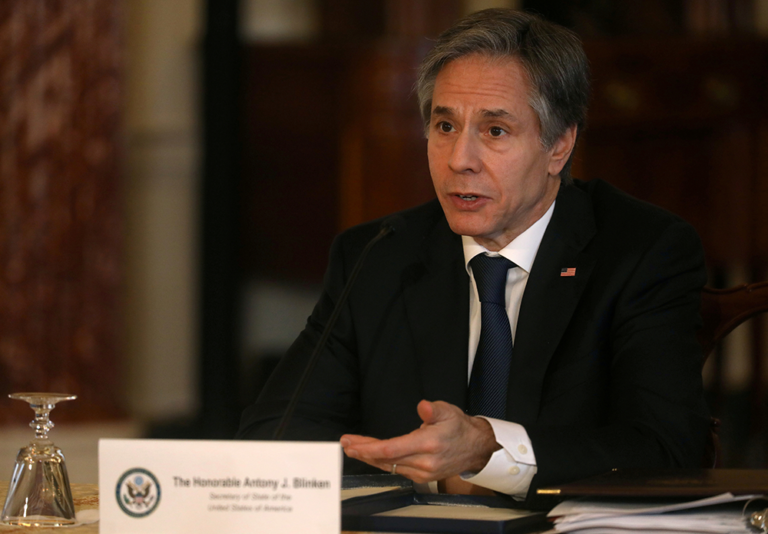 CHICAGO: US Secretary of State Antony Blinken is expected next week to name an individual who will be in charge of expanding “diversity, inclusion and outreach,” State Department representatives told Arab News on Wednesday.

Principal deputy spokesperson at the US Department of State Jalina Porter and senior Syria desk officer at the Bureau of Near Eastern Affairs Nadia Farra said the Biden administration is proud to celebrate Arab American Heritage Month (April) and views it as an opportunity to bring Arab Americans “to the table.”

During an interview on “The Ray Hanania Show,” broadcast live every Wednesday on the US Arab Radio Network in Detroit and Washington DC., Porter said that Arab Americans will be a part of the focus of the new chief diversity and inclusion officer, who will be named next week.

“It’s no secret that the Biden-Harris administration has been 100 percent committed to racial equity and it is, in fact, a strategic priority,” Porter said.

“At the same time, we are walking that talk when it comes to diversity equity inclusion. As we know, not even three weeks on the job Secretary Blinken rolled out a brand new office, the chief diversity, equity and inclusion role, which is going to be transformative. That is a huge commitment not only to the Arab American community but to all communities who are traditionally underrepresented in government. Diversity and inclusion make us stronger, smarter, more secure, more accountable, more creative.”

“Like their fellow citizens, Americans of Arab heritage are very much a part of the fabric of this nation, and Arab Americans have contributed in every field and profession,” Price said.

“President Biden is going to give Arab Americans and those in the larger diaspora a seat at the table. If that wasn’t obvious right here with Nadia (Farra), I will use myself as an example,” Porter said.

“Obviously, I am not Arab American, but as the first African American woman ever as a principal deputy spokesperson in an agency that is over 230 years old, I think that is kind of a huge deal that shows that maybe it took a little bit longer but we have so much more to do and so many places to go.

“Arab Americans fit along with that fabric. Your seat at the table is here. We welcome you to join us. We are treating this as a recruitment event as well. We have several avenues for you to serve, whether you are foreign service or whether you are civil service, or whether you want to be an appointee like me.”

During his first three months in office, Biden named nearly a dozen Arab Americans to various government posts, joining several career civil servants, such as Farra, who have been in government for more than a decade. Farra leads a team of six in the Bureau of Near Eastern Affairs.

“I want to make sure that I personally am shedding light on our Arab American communities. I want to say thank you, Nadia, and thank everyone for your service. It is so important that you are here,” Porter said in reference to all Arab Americans working for the US government.

“Representation matters. Your contributions before, during and what you do afterwards obviously always contribute to the fabric of American Democracy. I am glad to be a part of the transformation that we are going through now.”

“The roles that Arab Americans are placed in right now are incredibly influential and important, reporting directly to the president and the secretary of state and other departments’ leadership,” Farra said.

“Their expertise is based purely on educational and personal experience. They are put into roles where our leadership knows they will be objective and thoughtful, and be great counterparts to our foreign colleagues.”

Farra said that in the past Arab Americans were never recruited into government at this aggressive pace nor were they “pushed” by their immigrant parents to enter government service.

“The commitment is here (to Arab Americans) and it is here to stay. I can make that a personal promise to you. Not only will this conversation not end here, the conversation will be ongoing,” Porter said.

She added: “It is so important to reach audiences like our Arab American communities, audiences who are middle class, audiences who are traditionally underrepresented in our national security work force. It is really, really important that we make sure that everyone not only feels included but feels informed and that we are engaging in a way that is productive to our goals and puts American interests first and foremost.”

“The Ray Hanania Show” is broadcast live on the US Arab Radio Network on WNZK AM 690 in Detroit and on WDMV AM 700 in Washington D.C. and is viewable on the Facebook page of Arab News, which is a sponsor.

Visit www.arabnews.com for radio show information and podcasts of past programs.