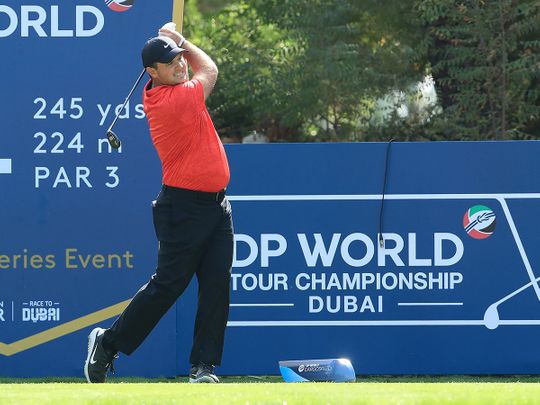 Dubai: American Patrick Reed shot a blistering eight-under at Jumeirah Golf Estates on Friday to take a two-stroke lead in the European Tour’s season-ending DP World Tour Championship — and take a step closer to becoming the first American to claim the Race to Dubai title.

Reed improved on his opening-round 70 with a sizzling 64 on the Earth Course in Dubai with a round that included nine birdies and a solitary bogey.

The 30-year-old has been in excellent form on the European Tour this season and was leading the Race to Dubai standings going into the final competition of the campaign.

However a host of players who know how to win in the UAE lurk and are still in touch with Reed at the top of the leaderboard.

England’s Matthew Fitzpatrick holds second spot on eight-under after a mixed round of 68 on Friday. Fellow Brits Laurie Canter and Tyrrell Hatton are tied in third a shot back, while some big names are in the group on six-under, including, Abu Dhabi champion Lee Westwood and the biggest dangerman for Reed — Tommy Fleetwood, who lies second in the Tour standings.

Still, given the form his is in, it will take something special to reel him in over the next two days.