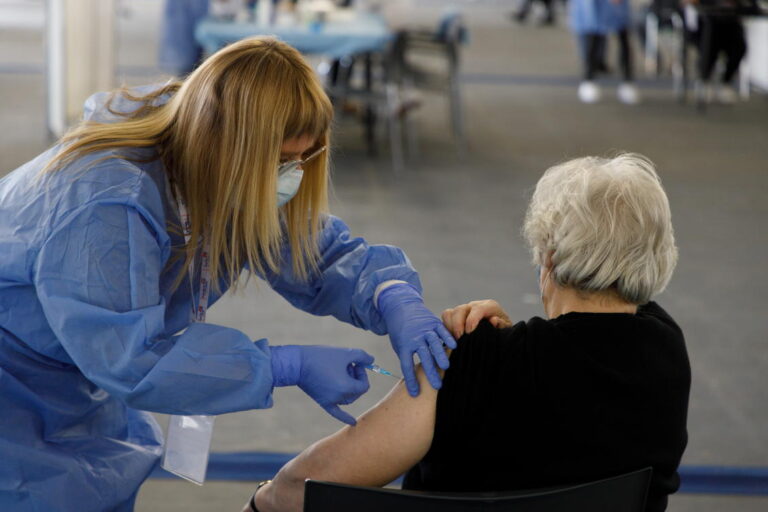 THE HAGUE: The EU’s drug regulator said Wednesday that blood clots should be listed as a “very rare” side effect of the AstraZeneca coronavirus vaccine but that the jab’s benefits continue to outweigh the risks.
No specific risk factors, including age, have been identified for thrombosis with the AstraZeneca shot, which could stem from an immune response, the European Medicines Agency (EMA) said.
The watchdog’s findings come after several countries halted the use of the vaccine following dozens of cases of people with clots in blood vessels draining from the brain after receiving jabs, some of them fatal.
“EMA’s safety committee has concluded today that unusual blood clots with low blood platelets should be listed as very rare side effects” of the AstraZeneca jab, the Amsterdam-based watchdog said in a statement.
But it stressed that it believed people should continue to take the vaccine as part of the battle against the disease.
“The safety committee has confirmed that the benefits of the AstraZeneca vaccine in preventing Covid-19 overall outweigh the risk of side effects,” EMA chief Emer Cooke told a news conference.
“It is saving lives.”
Despite the fact that many of the cases have been reported in women under 55, prompting a number of countries to restrict the vaccine’s use to older people, the regulator said it had not been able to pinpoint those at risk.
“Specific risk factors such as age, gender or medical history have not been able to be confirmed, as the rare events are seen in all ages,” Cooke said.
“A plausible explanation for these rare side effects is an immune response to the vaccine.”
The United Kingdom’s drug regulator says the AstraZeneca vaccine has huge benefits but people under 30 will be offered another product due to a rare blood clot risk.
The Medicines and Healthcare Products Regulatory Agency said that while it is studying the possible connection between AstraZeneca’s coronavirus vaccine and rare blood clots, the Pfizer and Moderna vaccines should be offered to people in that age group.