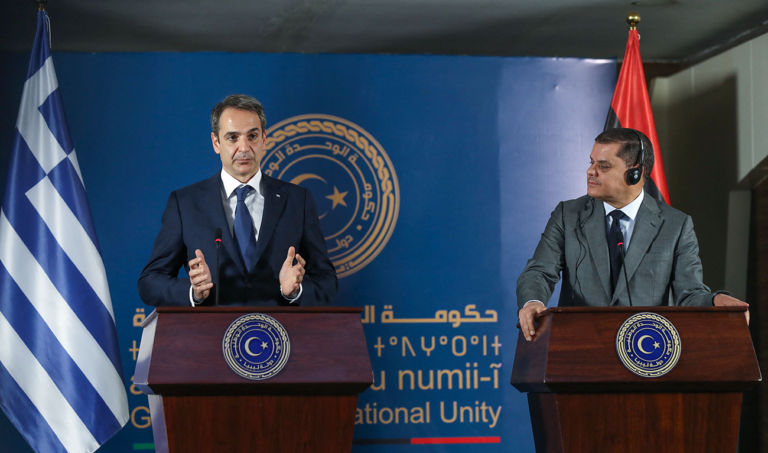 The visit by Greek Prime Minister Kyriakos Mitsotakis to Tripoli on April 6, and his meetings there with Libya’s interim political leadership, marked a return by Greece to engagement with the North African nation.

Relations deteriorated in November 2019 to their lowest point in years when Libya’s Government of National Accord (GNA) signed a memorandum of understanding (MoU) with Turkey on the delimitation of maritime zones in the eastern Mediterranean. Greece responded by expelling the Libyan ambassador and approaching Khalifa Haftar, the head of the Libyan National Army based in Eastern Libya.

At the same time, Athens watched with great unease the growing influence, politically and militarily, of Turkey in Tripoli. Ankara had become the strongest international supporter of the GNA, sending military advisers, military equipment (especially drones) and mercenaries to assist the UN-recognized government in its fight against Haftar’s forces.

However, with the election last month of the interim Government of National Unity (GNU) at the Libyan Political Dialogue Forum, under the auspices of the UN, the Greek government understood that it needed to rebuild its bridges with Tripoli.

“The visit of Prime Minister Mitsotakis marks the interest of Greece in revisiting ties with the Libyan interim government,” George Tzogopoulos, a senior fellow at the Centre Internationale de Formation Europeenne and a research associate at the Begin-Sadat Center for Strategic Studies told Arab News.

Mitsotakis, who was accompanied by Foreign Minister Nikos Dendias, met Chairman of the Presidential Council Mohammed Al-Menfi (a diplomat who served as the Libyan ambassador in Athens before he was expelled in December 2019) and Prime Minister Abdul Hamid Dbeibeh.

The Greek PM spoke about the prospects for bilateral cooperation in sectors such as energy, construction, health and maritime transport. However the main topic for discussion during his meetings with the new Libyan leadership was the future of the maritime delimitation agreement with Turkey, and the prospect of restarting negotiations between Athens and Tripoli about the delimitation of their own maritime zones, which stalled in 2010-2011 before the overthrow of Muammar Gaddafi.

“Greece seeks to present its position on maritime zones in the Eastern Mediterranean and prevent a situation in which the Turkish-Libyan MoU will be realized in the designated Libyan area,” Tzogopoulos said.

He believes that Athens “also considers the reconstruction of Libya as a good opportunity for investments by Greek companies, which had been active in Libya before the outbreak of the civil war. While Greece’s policy is in line with the EU framework, and relevant visits of other European leaders, its political return to the Middle East and North Africa region has been carefully planned for some time now.”

Mitsotakis has described the Turkish-Libyan MoU not only as null and void but also illegal. Greece argues that the agreement ignores crucial provisions of the UN Convention of the Law of the Sea, in particular those concerning the rights of islands in all maritime zones, which is something Ankara does not accept. Athens is concerned that it might be ratified by the Libyan House of Representatives, which the GNA failed to do because it did not control the parliament.

Greek diplomatic sources said that the GNU has been reminded that this issue of maritime delimitation could affect not only bilateral relations, but also the relationship between Tripoli and the EU.

Dbeibeh avoided going into any detail about the future of the MoU with Turkey. Instead, he highlighted the possibility of a Greek-Libyan committee to discuss maritime delimitation.

In the meantime Athens is willing to increase its presence in Libya. The Greek embassy in Tripoli has been renovated and reopened, on a charge d’affaires level, while a new consulate general is due to open soon in Benghazi.

“The reopening of Greece’s embassy in Tripoli should not be viewed as an isolated move as it complements the May 2020 decision to appoint a special envoy for Syria,” said Tzogopoulos.