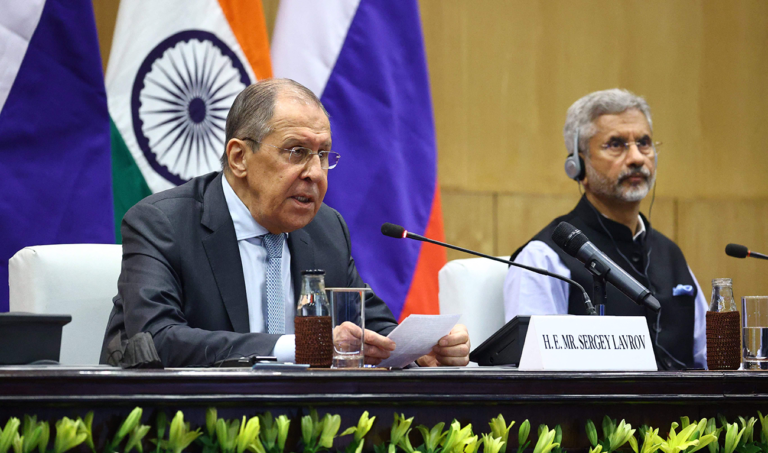 NEW DELHI: India and Russia’s foreign ministers met on Tuesday for talks to strengthen bilateral and defense ties, before discussing “in great detail” the Afghan peace talks with the Taliban.

The two nations’ annual gathering was called off last year due to the COVID-19 pandemic.

“Much of our discussion today covers the preparations for President Putin’s visit for the annual summit later this year,” Indian Foreign Minister Subrahmanyam Jaishankar said during a joint press conference after the Lavrov meeting.

The talks were the first high-level engagement between the two countries since last September and the first one since Moscow played a prominent role in defusing tensions between India and China in the disputed Himalayan region of Ladakh.

Moscow’s ties with Beijing are at an all-time high. At the same time, India is heavily dependent on Russia for its arms’ supply to protect its border with China.

“We talked about the long-standing partnership in the nuclear space and defense sector,” Jaishankar told the media, while Lavrov said the two parties had also discussed “deepening” military ties.

“We discussed bilateral military cooperation including state-of-the-art weapon manufacturing in the strategically important area,” Lavrov told the press conference, adding that Russia was the “only partner that indeed transfers to India cutting-edge military technology.”

“I am sure the deepening of the military relationship serves the national interests of both countries,” he said.

Tuesday’s talks were held after both countries “spent some time” discussing Afghanistan at the Heart of Asia Conference-Istanbul Process summit in the Tajikistan capital Dushanbe last week, where India was a participant.

“For India, what happened in Afghanistan impacts its security directly,” Jaishankar said. “I shared our approach that durable peace there would require harmonizing the interests of all, both within and around that country. The peace process must be based on the foundational principles on which we all subscribed, and a political solution should mean an independent, sovereign and democratic Afghanistan.”

Lavrov said that any peace process in Afghanistan would not be possible without the Taliban, emphasizing that “regional players should create a conducive atmosphere” both inside and outside Afghanistan for peace to succeed.

“The Taliban movement is part of Afghan society, and the decision on the settlement in Afghanistan foresees the participation of all political as well as ethnic and religious groups of Afghanistan. Otherwise, it’s not going to be stable. It would be sad if the peace process breaks.”

He also supported India’s role in peace in Afghanistan, saying Russia would “welcome” consultations and how to reinforce confidence-building measures with the involvement of Afghanistan’s neighbors.

“We always say that the neighbors and all-powerful actors in the region should set up conditions for the Afghanistan population to agree domestically.”

In 2018 India, based on an initiative by Russia, made a significant departure from its policy of non-engagement with the Taliban and attended talks with the insurgent group hosted by Moscow.

India and Russia during Tuesday’s talks also discussed the coronavirus pandemic and agreed on “pharmaceutical cooperation” to produce a COVID-19 vaccine.

“We have a Russian vaccine under discussion for production in India,” Lavrov said.

With several parts of India recording a spike in COVID-19 cases, the government is holding internal discussions to clear Russia’s Sputnik V for emergency use, according to media reports.

“The visit of Lavrov is significant in the context of the fact that there is an expected summit between Modi and Putin later this year given the recent development in Afghanistan and Russia playing a significant role in it,” political analyst Nandan Unnikrishnan, from the Observer Research Foundation, told Arab News. “Therefore briefing India about the progress in talks is critical.”

He said that the visit reinforced ties between the two nations because, in recent years, “some differences” had emerged between them on geopolitical issues like the US-led India-Pacific strategic group aimed at containing China.

Russia was “not comfortable” with India’s deepening US security ties either, he added, especially India’s active participation in the Quadrilateral Security Dialogue or Quad, which is an informal strategic dialogue between the US, Japan, Australia and India.

“The Quad is also one area where both Russia and India differ because Moscow feels that the informal strategic group undermines its geopolitical interests.”