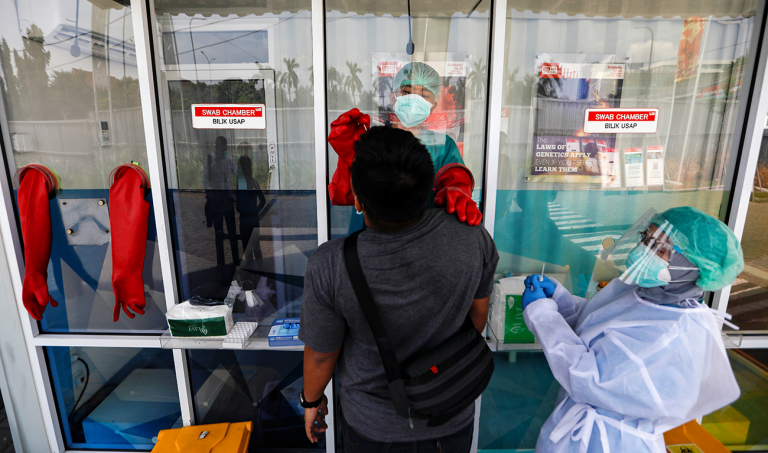 JAKARTA: Indonesia on Tuesday committed $1 million to the Oslo-based Coalition for Epidemic Preparedness Innovations (CEPI) to develop vaccines for various diseases that could develop into pandemics.

Indonesia’s Minister of Foreign Affairs Retno Marsudi and CEPI officials made the announcement during a virtual signing of the bilateral contribution agreement earlier today.

In her remarks, Marsudi said that recent news on the progress of vaccine development was very encouraging, but that a lot more remains to be done.

“Indonesia chooses to walk the talk and contribute within its capacity to vaccine multilateralism to protect its people and the world,” she said.

She added that the agreement enables Indonesia to make a concrete contribution to a vaccine for all, reiterating the nation’s position since the beginning of the pandemic — that all countries deserve fair, affordable and equitable access to a vaccine for the coronavirus disease (COVID-19).

“Without it, developing and less developed countries are at risk of being left behind,” Marsudi said.

Richard J. Hatchett, CEO of CEPI, said in his remarks that the coalition was “delighted to welcome Indonesia” to its ranks.

“We can work together to support our shared goals to develop a safe, effective and globally accessible vaccine,” he said.

Hatchett added that since the CEPI had invested in nine of the world’s COVID-19 vaccine candidates, with eight of them entering clinical trials out of 48 globally, two of them had reported positive outcomes in the third phase of clinical trials.

“But we must remember, it is not a vaccine that saves lives but vaccination. A vaccine must be administered to have any value at all,” Hatchett said, adding that the challenge ahead would be the manufacturing and delivery of those vaccines, which would require an unprecedented global effort.

During a recent press conference with the Ministry of Trade, Yose Rizal Damuri, Indonesia’s G20 scholar and a senior economist at the Jakarta-based think tank Center for Strategic and International Studies said that “the battleground has shifted to vaccines” now that Indonesia and other countries had loosened restrictions on personal protective equipment (PPE) and medical devices.

State-owned vaccine manufacturer Bio Farma has boosted its production capacity to produce up to 250 million doses next year of a potential COVID-19 vaccine developed by Chinese company Sinovac, whose vaccine is undergoing the third phase of its clinical trial in Bandung, and another vaccine being jointly developed by Abu Dhabi-based G42 Healthcare and China’s vaccine manufacturer Sinopharm.

In his remarks during a G20 trade ministers’ meeting on Sept. 22, Minister of Trade Agus Suparmanto said that easy access and affordability of medical supplies, especially a vaccine, was crucial to the group’s joint efforts to combat the pandemic.

“The G20 should seek to prevent irresponsible commercialization practices in pandemic times by supporting the flexibility to exercise intellectual property rights under international agreements,” the minister said.

Indonesia has also been keeping with its commitment to the G20 Action Plan in response to the COVID-19 pandemic by lifting some of its export restrictions on PPE and other goods related to measures in controlling disease, a trade ministry official said.

“We have been gradually loosening restrictions and exporting goods to South Korea, while also maintaining a sufficient domestic supply,” Pambagyo said.

“We make adjustments on export restrictions from time to time as we prioritize our fellow citizens,” he added.

Suparmanto, for his part, reiterated Indonesia’s commitment to several G20 members’ short and long-term collective actions in the trade and investment sector to mitigate the impact of the pandemic, maintain an open market and take the necessary steps to facilitate trade.

“Indonesia has issued policies in line with the G20 Action Plan, such as removing a number of export and import barriers,” he said.