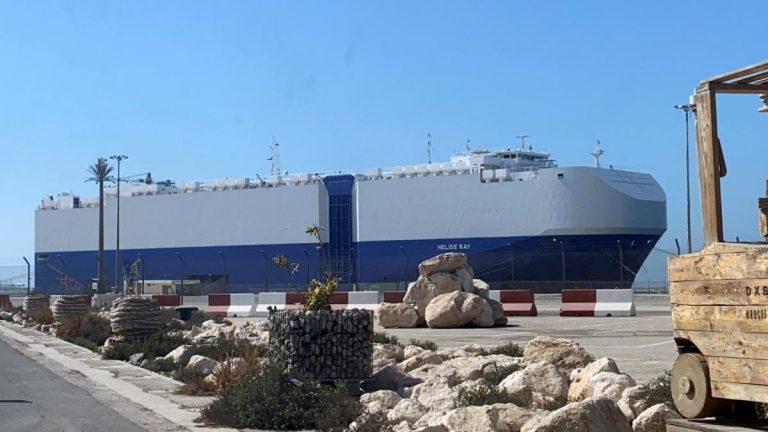 DUBAI: An Israeli-owned cargo ship that suffered a mysterious explosion last week has left Dubai’s port and was transiting the Gulf of Oman on Wednesday, satellite tracking data showed. The suspected attack has raised tensions in the region.
The giant MV Helios Ray, a Bahamian-flagged roll-on, roll-off vehicle cargo ship, was sailing along the Omani coast toward the Arabian Sea, according to satellite-tracking data from website MarineTraffic.com, days after docking in Dubai for repairs. Overnight, the vessel passed through the strategic Strait of Hormuz, the narrow mouth of the Arabian Gulf through which a third of the world’s oil flows. Its destination remained unclear.
Last week, a blast struck the cargo ship in the same waterway, raising alarms about ship security in the Mideast. Israeli Prime Minister Benjamin Netanyahu accused Israel’s regional foe Iran of attacking the ship. Iran swiftly denied the charge.
Tensions between Iran and the West have escalated in recent weeks as Iran accelerates its nuclear program, seeking to pressure the United States to grant sanctions relief it received under its tattered 2015 nuclear deal with world powers. In the current standoff, each side is insisting the other move first to return to the deal, which former President Donald Trump abandoned nearly three years ago.
It remains unclear what caused the explosion, which reportedly punched two holes in the vessel’s port side and two on its starboard side, just above the waterline. The incident recalled the summer of 2019, when the US military blamed Iran for a series of suspected attacks on oil tankers in the Arabian Gulf. The Navy had alleged that Iran used limpet mines — designed to be attached magnetically to a ship’s hull — to strike some of the vessels. Iran denied any role in the suspected assaults.