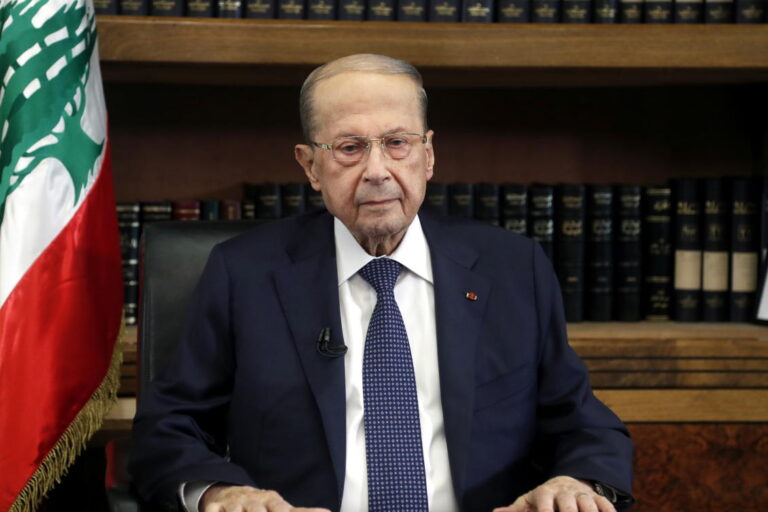 BEIRUT — Lebanon’s President Michel Aoun on Wednesday held the Central Bank responsibility for the financial collapse and stalling an audit, which’s a key condition for foreign aid the country badly needs.
In a national address, Aoun accused Lebanese banks of squandering people’s savings and the Central Bank’s governor of giving excuses for refusing to answer 73 out of 133 questions that consultancy Alvarez & Marsal had sent for the audit.
“To the central bank I say: the main responsibility befalls you,” he said, in his strongest criticism yet. “You should have taken measures to protect people’s money in the banks.”
Central Bank Governor Riad Salameh did not immediately respond to a request for comment.
The paralyzed banking sector is at the heart of Lebanon’s financial collapse, which came to a head in 2019 when dollar inflows dried up and protests swept the country.
The heavily indebted state and the banking sector, its biggest creditor, have since traded blame for the crisis, Lebanon’s worst in decades.
Banks have frozen savers out of their dollar deposits, as the Lebanese currency lost most of its value, plunging many into poverty.
Leaders have failed to launch a rescue plan, instead wrangling over the make-up of a new government, with Aoun and veteran politician Saad Al-Hariri, who was designated premier in October, locked in a standoff.
Foreign donors have warned they will not give any aid without reforms to tackle crushing debt and entrenched graft, root causes of the crisis. An audit of the Central Bank is a key demand.
Aoun said in Wednesday’s speech politicians shared the blame for providing the Central Bank with cover, without naming individuals.