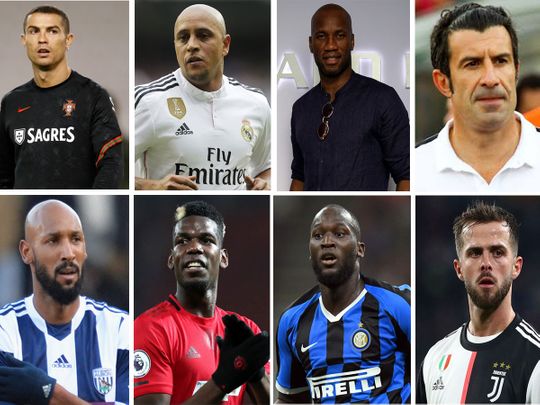 Dubai: The list of football superstars who have been granted the UAE gold card visa is long.

Along with the legend Didier Drogba, a number of other superstars have also been granted the honour by the UAE.

The gold card is a long-term residency programme announced by Shaikh Mohammad bin Rashid Al Maktoum, Prime Minister and Ruler of Dubai in May 2019.

It aims at granting residency to investors, athletes, exceptional doctors, engineers, scientists and artists. In a major extension of the scheme this month, eligible doctors and PhD holders have also been included to secure the 10-year golden visa. Engineers in the fields of computer engineering, electronics, programming, electricity and biotechnology, as well as graduates from UAE accredited universities who scored a Grade Point Average, GPA, of 3.8 and above are also among the privileged. In addition, some big names in footballwere also chosen. Here is the full list:

Portugal and Juventus striker Cristiano Ronaldo, who bagged the ‘Best Player of the Year’ award at the annual Dubai Globe Soccer Awards at the end of December for a record sixth time, is a regular visitor to the UAE.

Ronaldo, who turned 35 on February 5, started off with Sporting Lisbon before his memorable stints with Manchester United and Real Madrid. In 2018, he moved on to Juventus.

Ronaldo has always held Dubai close to his heart. At the two-day conference held at the end of December, he had spoken about his love for the city while also applauding the tremendous support he has received from the community in the region.

The Portuguese star, who is hugely popular on social media, regularly shares pictures of his adventures.

And with earnings of more than 720 million Euros between 2010 to 2019, Ronaldo has been ranked second in the Forbes list of highest paid athletes of the decade.

The Brazilian retired defender, Roberto Carlos, has been granted the gold card visa. He has been visiting the UAE for many years and supporting many sports events and initiatives.

He has taken to social media to urge UAE residents to stay fit and safe during the ongoing coronavirus pandemic.

In November 2020, the General Directorate of Residency and Foreigners Affairs welcomed the former Chelsea and Ivory Coast legend Didier Drogba to get the gold card visa.

The two-time African Football Player of the Year was presented with the ‘Medal of First Line of Defence’ in appreciation of his support for the Dubai Sports Council’s ‘Be Fit, Be Safe’ campaign.

Considered one of Chelsea’s greatest, Drogba, 42, who won four English Premier League titles and a Champions League crown in a decorated eight-year career with the London club, is said to be looking for investment opportunities in Dubai.

The Portuguese athlete was a record holder for his national team.

The former French striker Anelka, who lives in Dubai with his family, was honoured by Dubai Sports Council (DSC) with the ‘Medal of First Line of Defence’ in appreciation for his support for the council’s ongoing ‘Be Fit, Be Safe’ campaign.

Anelka, who won the 2000 European Championship with France and played for top clubs like Arsenal, Manchester City and Real Madrid.

The Belgian striker for Inter Milan, who has been granted UAE gold card visa, is 27.

He boasts of playing with clubs such as Chelsea, Everton, Manchester United and Inter Milan on his resume.

This Bosnian professional footballer, who is also a privileged UAE gold card, was in Dubai to attend the Global Soccer Awards.  early in 2020.

The Global Soccer Awards in which Pjanic made an appearance was held early in 2020.