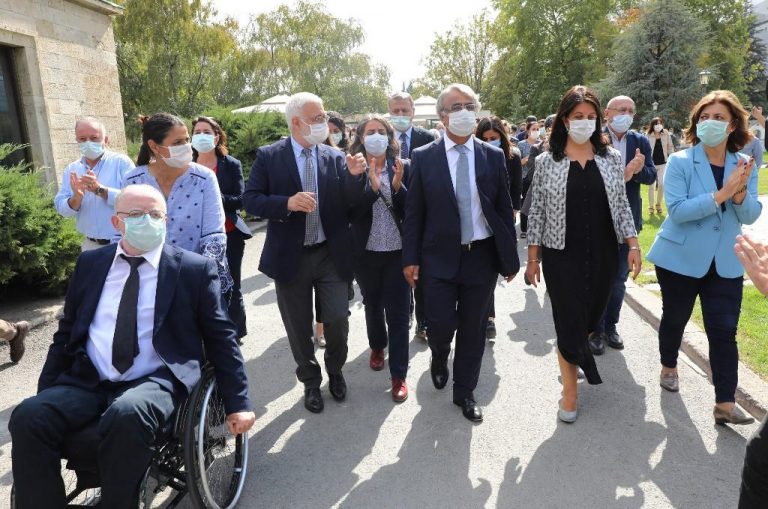 ISTANBUL: Turkey’s parliament is set to consider legal bids to lift the immunity from prosecution of 21 pro-Kurdish MPs, applying more pressure on a political party targeted in a years-long crackdown and that now faces calls for its closure.
The government accuses the Peoples’ Democratic Party (HDP), parliament’s third largest, of ties to Kurdish militants and stepped up its accusations after Turkish captives were killed in Iraq earlier this month.
The HDP in response criticized President Tayyip Erdogan’s ruling AK Party (AKP) for using a failed military rescue mission to target it politically and to sow ethnic division, and the European Union has expressed concern over the legal moves.
AKP Parliament Speaker Mustafa Sentop told reporters on Thursday it was “saddening” for parliament to have to deal with so many dossiers with such charges, including “manslaughter,” “spreading terrorist propaganda” and “provoking hatred.”
State-owned Anadolu news agency said 20 HDP deputies and one from an affiliated party were among 25 targeted by the cases. The HDP, which has 56 members in the 660-seat assembly, denies links with Kurdistan Workers Party (PKK) militants.
The legal bids will first be handled by a parliamentary commission which will decide whether to put them to a vote in the general assembly. The timing of the process was unclear.
Nine of the HDP deputies were accused in connection with protests triggered by a Daesh militant attack on the Syrian town of Kobani in 2014. The subsequent protests in Turkey led to the deaths of 37 people.
Ankara said this month in Iraq’s Gara region the PKK executed 13 prisoners, including Turkish military and police personnel, during an army operation meant to rescue them. The PKK said the captives died during clashes.
HDP co-leader Pervin Buldan, one of those accused over the Kobani protests, said this week the government had sought to make political capital out of the Gara operation.
“They began to attack the HDP from all directions. Each day the ‘shut down the HDP’ chorus continues to cause uproar, show enmity toward Kurds and spread the hatred climate,” she said.
Erdogan’s nationalist allies have repeatedly called for the HDP’s closure over links to the PKK, which Turkey, the EU and United States designate a terrorist group. The PKK has waged an insurgency in the mainly Kurdish southeast Turkey since 1984 and more than 40,000 people have been killed in the conflict.
The crackdown on the HDP in recent years has included the arrests of thousands of party officials and members, while dozens of its elected mayors and lawmakers have been ousted.
EU foreign affairs spokesman Peter Stano said earlier this week the EU was “gravely concerned” about continuing pressure on the HDP, including “what seem to be politically motivated judicial proceedings.”